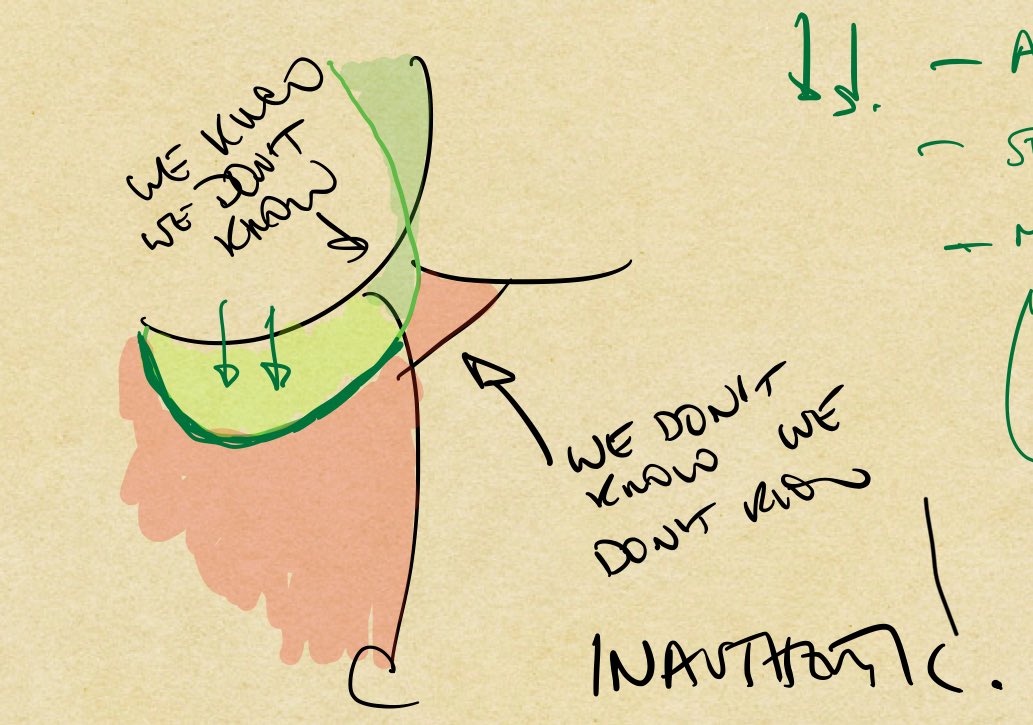 The Cynefin® Framework is a sense-making framework designed to help us understand the world so that we can act in it. It is there to help us decide what type of system we are in, what type of methods and tools we can use there, and how we can move between the domains.

The ordered domains: clear and complicated

The ordered domains – clear or complicated – both have a high level of constraint. In the clear part, the relationship between cause and effect is clear to any reasonable person. For example: in Germany, people drive on the right. In other, mostly Island countries, like the UK, people drive on the left. So there’s a clear relationship between cause and effect and all reasonable people buy into it. In the domain of the obvious, you can always apply best practices. You can simply categorize things and respond accordingly. 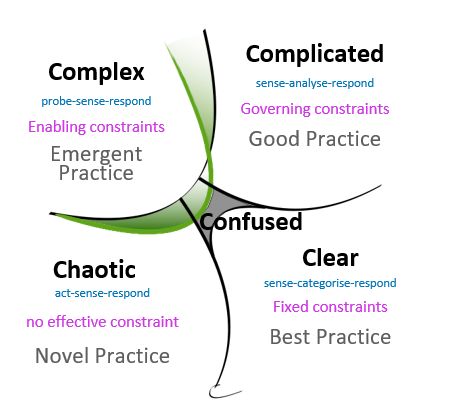 In the complicated domain, things are only clear to technical experts, not to laymen. In these types of situations, you have to bring in expertise, analysis, or research to find out what you should do. A simple example would be when a technical instrument breaks down. Most people do not know how they have to fix it, but they do know who to call when it happens. The point about both of the ordered domains is that there is a right answer and it is knowable (complicated) or even known (clear). Decision trees of possible outcomes can be identified, risks and probabilities around these outcomes can be calculated, and contingency plans for each path can be predetermined, controlled, and de-risked.

In the chaotic domain, there are no (effective) constraints and behaviour is therefore mostly random. Chaos doesn’t last long in human systems as it’s a part of our nature to impose order wherever we can. The energy cost of ‘maintaining’ chaos is too big.

But chaos is not necessarily something that needs to be avoided at all times. Used deliberately and in small doses, creating chaos by removing all or most constraints can be a way to stimulate innovation or distributed decision support. You just need to know what you are doing. Of course, accidental chaos as we get during natural or humanmade disasters is an undesirable state and the goal then is to move to another domain as quickly as you can.

In a complex system, then, everything is connected with everything else in some way, but these connections are not fully knowable. Dave used Alicia Juarrero’s ‘bramble bushes in the thicket’ simile to explain this: “in a dense woodland filled with bramble bushes, you know that there are separate plants, but you simply can’t separate them. The connections are far too complex.” Just like that, complex human systems are ‘entangled’. Here, we talk about correlation and retrospective coherence, not of (linear) causation and predictable outcomes. 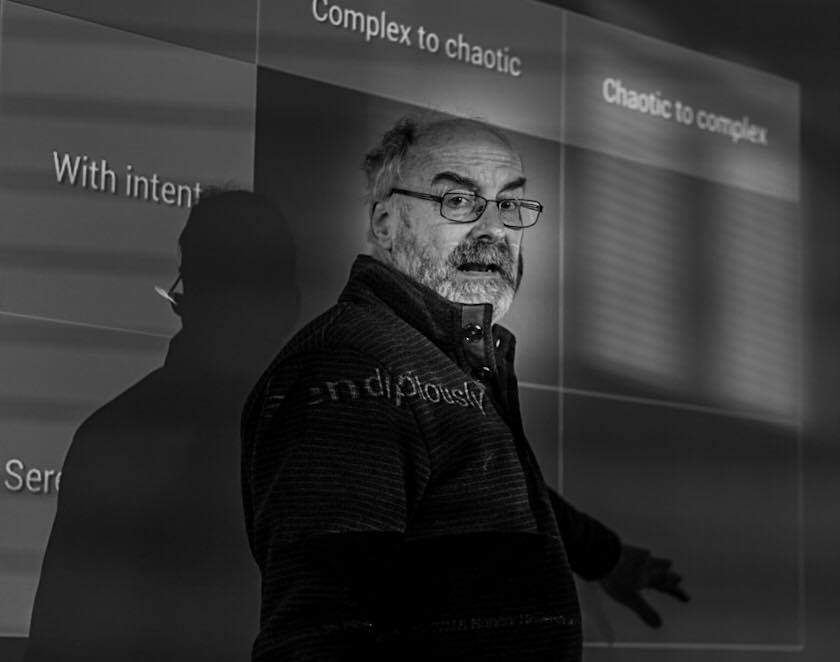 It’s like the difference between, say, a Ferrari and the Brazilian rainforest. Ferraris are complicated machines, but an expert mechanic can take one apart and reassemble it without changing a thing. The car is static, and the whole is the sum of its parts. The rainforest, on the other hand, is in constant flux—a species becomes extinct, weather patterns change, an agricultural project reroutes a water source—and the whole is far more than the sum of its parts. This is the realm of “unknown unknowns,” and it is the domain to which much of contemporary business has shifted. (Dave Snowden, 2007)

The biggest danger with a complex system is that, with the benefits of hindsight, anybody can attribute causality that’s often incorrect. People tend to subtract ‘lessons learned’ in these situations and then wrongly conclude that they figured out how it works and will get it right the next time (‘retrospective coherence’)

Cynefin has five domains: The fifth and critical part, which lies in the centre of the framework, is the disordered or confused space: it’s what happens when you don’t know which sort of system you are in. That can be legitimate: for instance, when you have just been confronted with a new situation and you know that you don’t know which type it is or how to best respond. But you want to do something about it. But it can also be illegitimate when you think that you know what you are doing and you are not prepared to listen to people who say that you are wrong (we would call that ignorance).

See here for Dave’s article that received broad recognition in a 2007 HBR piece titled A Leader’s Framework for Decision Making. On March 1 (St. David’s Day) 2019,  he wrote a series of blog posts (5 in total) covering updates to the model; Cynefin St David’s Day 2020 (1 of 5)

We work closely with our friends and colleagues from Dave Snowden’s company Cognitive Edge.