Sense and the City 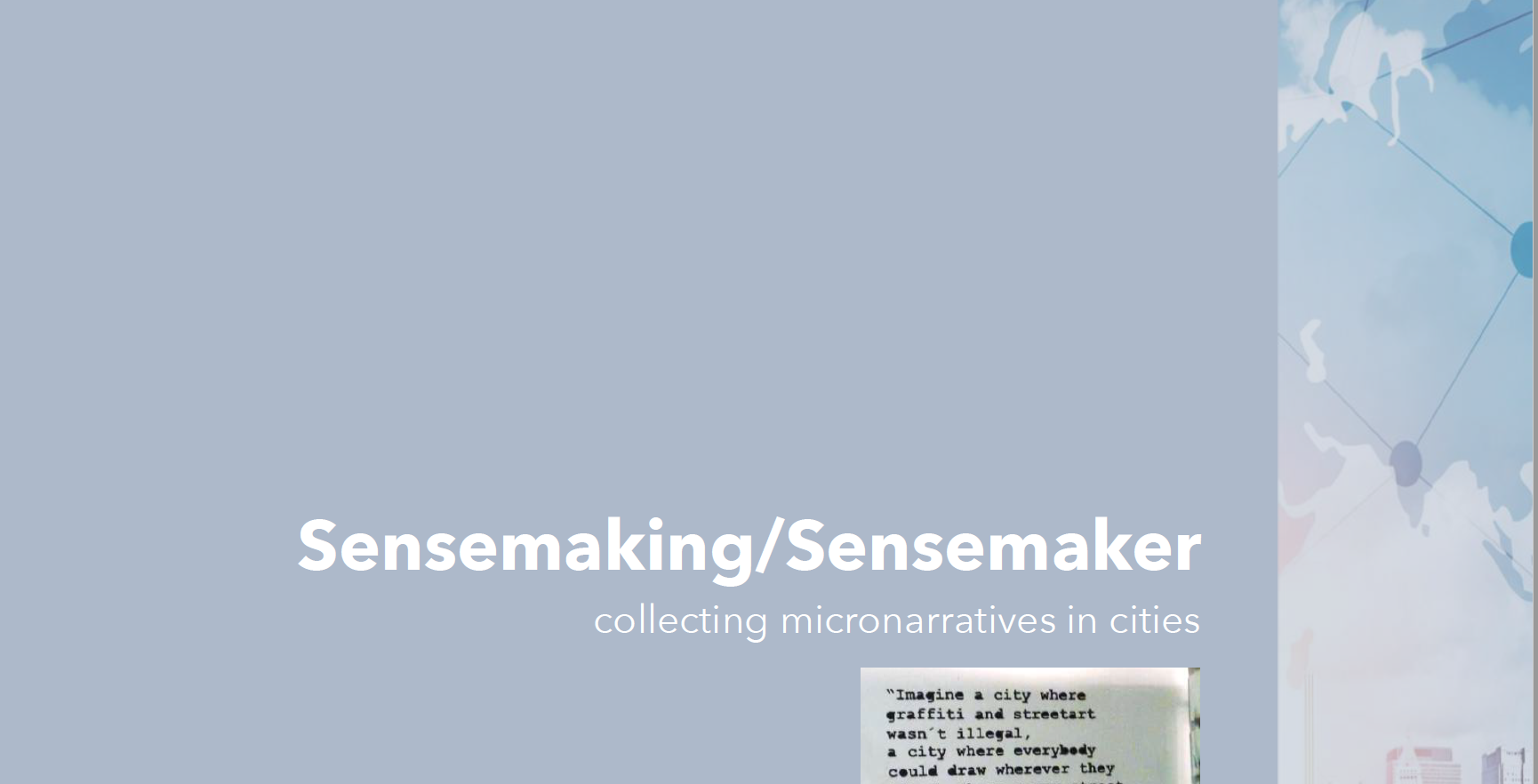 and a Theory of Change

This article was originally published in Paul van Schaik’s Urban Hub 21: Coming of Age – Dare to Dream (2020): It can be looked at here (pages 82ff), or bought here. Download the article here.

The crisis of confusion

Two of the major crises of our time, Covid-19 and climate change, are indicators of the general failure of our globalized, co-dependent and fragile systems  Collectively, we are in a phase of deep uncertainty. At the moment, it seems that our own interests contradict each other on many different levels of our work and personal life. We have a hard time balancing our basic values while it seems that work is pitched against health, health against freedom, economic interests against survival, young against old, ethics against pragmatism. We are in an unprecedented crisis of confusion: we are unable to process what is happening around us sensibly in real time in order to be able to act.

Nowhere is this a multiple Crisis of Sensemaking  more evident than in our cities. Existing pathologies and systemic issues are magnified, like in the case of an uproar in domestic violence, the fact that the elderly in their homes can’t be visited, or worse, have to die alone. New fault lines show themselves between privileged and not privileged, being able to keep distance or in having access to a garden or not.

At the same time, the current crisis offers historical chances to allow new habits, new rituals, new ways of dealing with each other in our relationships, economies, and ecologies. Some cities, like Amsterdam, are talking about adopting different approaches to value chain and city management (doughnut economics). Experts estimate that through the obligatory working in home office and the resulting push in innovation in telecommunication on the one side and trust on the other side, between 15 and 30% of office retail space in our city centres will be obsolete in the near future, which would open up other
possibilities for housing etc. New stories are emerging, both utopian and dystopian at the same time.

Whatever happens, it will have an impact on the way we live together, on the urban fabric, the city scape, our co-living space. Any attempt to cocreate a new generative direction consciously, in its best integral sense, must start with paying attention to the phenomena that are actually happening right now, to the overall felt sense of confusion on the one hand and collective sensemaking on the other, especially when people are overwhelmed by the ambiguity inherent in current developments. Fears, worries, contradictions, values, new ideas, frustrations, shadows, wishes and desires live here, on this level, right now.

So, what if we listened deeply? What if we could access the high dreams and the low dreams, the fears, concerns, ideas, trends, signals coming from the system, the early warning signs for changes that are currently taking place or those that are overdue? What do people tell each other about how they experience and understand the crisis? And of course: how can collective change take place on this basis? How can a new,meaningful narrative be created here.

It’s the Stories that create the Future

Applying the findings from complexity research and cognitive science consistently, as Prof. Dave Snowden and
his team at Cognitive Edge did, a slightly different design is created that avoids such errors. Snowden uses a software (“SenseMaker”) to collect so-called micronarratives, i.e. he asks in organizations or communities for small stories about
everyday experiences, for anecdotes, for snippets of stories from daily work or private life that make up the fabric of our
meaning making systems.

The SenseMaker® – Software provides the ability to capture stories and experiences, and the ability for the respondent to self-analyse their story. By allowing the originator of the story the power to interpret it, the process seeks to democratise the research. At the same time it allows us to identify patterns and themes in the stories and to identify collectively held belief and contradictions.

Each capture looks for certain aspects of collective action that are in the foreground, such as: What is going on? What values are lived? What culture is prevalent? Which attitudes are dominant – in relation to refugees, the environment, recycling, public
transport, climate change, the willingness to do something or not? The key question is asked indirectly, more generally, in the direction of:

“How is it to live in your neighbourhood?” “What would you tell a friend who wants to work in your company?” “What is important to talk about?”

Through a series of design principles, that make the SenseMaker®-Capture different from traditional surveys, the
respondent’s micro-stories are embedded more accurately in their systemic and relational contexts and can keep their
natural ambiguity of the lived experience. In this way, real, self-determined, context-related real-time data (qualitative
and quantitative) are collected.

Here are examples of “triads” from the SenseMaker-Capture that was part of the Integral LIFT (Leadership in Transition) EU project: The participants are asked to move the white dot to the position that seems to fit best. All 3 key points are equally positive or negative – one is not better / worse than the other. This briefly stimulates the respondents to think (‘cognitive activation’). If all three factors are equally relevant, the ball ends up in the middle.

Next you see some examples of signifiers from the capture for the City of Malmö. The project “My Malmö” is a a collaborative initiative established by the NGO Forward Malmö, Tjejer I Förening and the Cynefin Centre (coauthored by Bethan Smith), funded by Malmö Municipal government. Designed to bring to light the everyday yet important conversations and experiences that happen in the city, to help the city better understand and address the biggest issues and opportunities facing the future of Malmö.

The goal was to start meaningful conversations, create useful material that can be used to encourage people to explore and
understand key issues in their city, and to create new ways of addressing these issues together (My Malmö Draft report 2020). Over a period of 4 weeks the young people from the initiative went on capture over 1500 micronarratives.
Each dot stands for a story that was entered and contextualised. By clicking on the dot the story itself remains accessible. At the collective level we can look for insightful patterns, trends, outliers and dispositions of the city system.

“Malmö is a natural city and a lot happens here, I am not directly affected by crime. I feel pretty safe here in Malmö but am a little worried about my children’s future”.

“Great and nice city, problems with rubbish and too many people, happy with neighbours people and culture. The children
enjoy reading. However, I am afraid about my children and myself as a woman when we walk in the evening. It has gotten worse last year.”

“Malmö is a nice city that has changed my life for the better. I have a daughter who is ill and has a little difficulty
understanding and learning things like other children. When I moved to Malmö seven years ago, I did not know
the language and had no information at all about how I could help my daughter who was then 5 years old. After a
while I found out that there is an open preschool in Rosengård where parents can take their children to play.
When the staff heard my story, they were very helpful and referred me to a specialist who could help me with my
daughter. After that, my daughter had to start school where she got the help she needed and since then she has
developed a lot. I love Malmö because the people here are very helpful and because there are lots of associations that
exist just to help others get into society and thrive.”

“A young woman says that she thinks Malmö has gotten worse in recent years and that she does not feel safe at all
or for her children. She says that she hopes it will get better so that her children do not have to be in contact with crime.
Despite this, she thinks that Malmö is still a nice city with many activities and occupations. She thinks it is good that
there are leisure activities for children, for example.”

“When I started high school and got to meet my class and then I found out that Malmö is not that bad. I thought when you meet people who live in different places you usually get a bad picture, but when I met them, my picture of the people here changed more. It made me think that Malmö is still an okay city and we all feel connected in some way.“

Due to the collected stories patterns of challenges appear. Those can in short be summarized as follows:

Due to the responses we can also identify a few positive patterns. For example:

The stories and the patterns that emerge this way show ways out of the initially described crisis of confusion, both on a personal and on a collective level. On a personal level, the mere fact that one’s own contribution is “heard” can have a
cathartic effect and give people a voice. Furthermore, the individual contributions can point to hyper-concrete situations the have immediate action potential. When looked at collectively, the charts can provide a contextualized picture of “what is actually going on”, with patterns and clusters providing an insight into collectively held beliefs, perceptions and experiences.

This can allow key stakeholders to identify emerging themes whilst empowering the community to provide their own
explanations and to identify solutions to existing conflicts (refugees, inclusion, safety) or to novel challenges (pandemic).
Many of these solutions that come out of the sensemaking process can be dealt with right away without long-term planning and bureaucracy. The motto is: “What can we do tomorrow so that we get less of the negative and more of the positive
stories”?

This approach is all the more important since larger collectives that only have diffuse cohesion, many different value streams and little internal coherence lack most of the basic conditions for intentional change processes, as we know them for individuals or groups.

The guiding principle in the sensemaking work follows the approach of fractal intervention: action potential exists at all levels, from the highest level to the lowest, with formal and informal influencing factors and constraints. In the complex domain (see D. Snowden’s CYNEFIN Framework), change takes place by changing framework conditions and attractors, promoting conditions that are considered advantageous and dampening negative factors. The type and amplitude of such measures depends on the properties of the respective system, e.g. the respective openness or closeness to changes (or to the environment, climate change, new policies, etc.) and is aimed at the next possible step, not a large, distant ultimate goal.

A Theory of Change

Change in the whole collective is then a result of the sum total of all (micro-)shifts in everyday behaviour, relationships and attitudes in a direction that is desirable. The small step is the key unit here. This can actually be a different way to do funding, street lightning, planting schemes, public transport fees or different interventions in the urban realm and fabric.

Sense and the City